All year we’ve been running a simple ratings system of AFL teams using inside-50 differentials and inside-50 efficiency, based on the fact that inside-50s correlate fairly well with success and therefore the assumption that quantity and quality is a key measure of team strength. We’ve written a bit about this in the past, as has Tony Corke, the doyen of the fanalytics community.

There’s been a ton of Grand Final previews to date, and we don’t want to tread over the same ground. We seriously advise you to check out the Matter of Stats piece in The Guardian earlier this week, as well as the Figuring Footy pieces. Both are must-reads before the Grand Final, certainly more than this preview of ours.

We will look at a couple of different questions in this preview:

There’s been a bit of chatter around regarding the improvement of the teams since the start of the finals, so we thought we’d pull up a few charts looking at the differences between each team’s performance in a few categories:

Interestingly, the Bulldogs have managed to snag more marks inside fifty per entry since the H&A season ended, whilst the Swans have gone the other way. This may have something to do with the quality of tall defence that the Swans have faced compared to the Dogs (especially in Geelong). 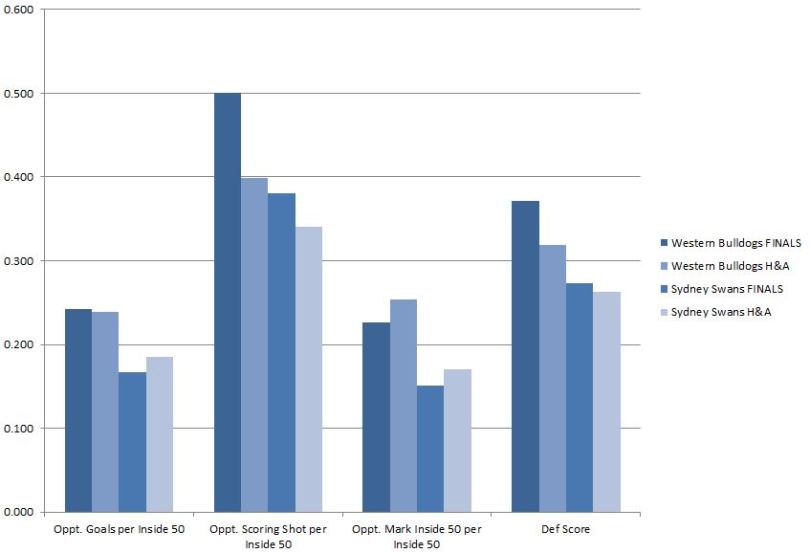 The Dogs have actually gone backwards defensively since the start of the finals. They have conceded scores on half of their conceded inside 50s, which ordinarily would indicate a bottom four defensive side. The Swans’ Defense Score has largely stayed the same, with a small increase in the scoring shots they have allowed per conceded inside-50.

In short, the Bulldogs’ defensive 50 has been quite leaky, but they tend to let the ball in there relatively rarely (as per the chart below).

Both ruck divisions have suffered against strong opposition in the finals so far (with the Swans having an overall edge despite missing Tippett for parts of the series), while their methods of ball use are similar. The critical difference is the divergence in the inside-50 ratios of both teams over the finals. While the Bulldogs have improved significantly on their already solid performance in this area during the season, the Swans have gone way backwards.

Given that there is about 105 inside 50s in an average H&A game this year, it could be expected on finals performances to date that the Bulldogs will get the ball up forward around 81 times to the Swans 34. Whilst this is a projection based on a very small sample size, it represents the worst case scenario for the Swans (and the best for the Bulldogs). If the Bulldogs win the inside-50s to this degree, it will be extremely hard (if not impossible) for the Swans to generate enough scoring shots to win. Again, HPN expects this to somewhat revert to each team’s H&A averages, given the Swans have faced stronger midfields in the finals to date.

The Swans should be more efficient up forward, and better able to repel the Dogs attacks, however there will inevitably be a breaking point if they are unable to stop the Dogs monopolising supply via their dominant midfield. Even if the Swans manage to score on half their inside-50s, and limit the Dogs to scoring just 35% of the time, tor win they would still need to perform better in the middle than they have so far this finals series.

What do previous Grand Finals tell us about this game, considering the strengths of each team?

In this part of the post we’re going to take a look at how grand finalists since 1998 rate under this system. Below is a table of each premier since 1998, compared to their grand final opponents in each of the three ratings categories. Note that these ratings only consider the Home and Away Season.

Presented another way, here’s a chart of each pairing over the years and how Sydney and the Bulldogs compare to them.

In overall strength, the Sydney-Bulldogs gap is the third largest between grand finalists since 1998, with both larger gaps (Essendon-Melbourne in 2000 and Geelong-Port Adelaide in 2007) resulting in maulings by the favourite. The next biggest, Brisbane-Collingwood in 2002, was a closer 9-point affair.

Below is each of these gaps graphed. A number of premiers have overcome a gap in these measures, but none a gap as large as this (note how we are refraining from using the “UnderDogs” pun).

The biggest upsets by this rating system were Sydney over Hawthorn in 2012 and Geelong over St Kilda in 2009. The Dogs upsetting Sydney would be a larger coup than this.

Lets drill into each individual line, starting with the midfield.

The Bulldogs have the edge over the Swans by 6% of the league average in terms of raw inside-50 production. Their “midfield” (really the combination of how all players including midfielders contribute to ball movement and ball stopping between the arcs) is a bit stronger than Sydney’s in terms of generating and stopping forward opportunities.

This gap will be vital because:

Over the year, the Bulldogs’ offfence has been anemic. They’ve needed to use their inside-50 advantage (presumably including repeat entries caused by midfield-based defence) to produce a larger number of opportunities to score.

That might be a problem in this matchup because of something we’ve been commenting on since early in the year:

Sydney’s defence against inside-50s has been astonishing this year, clearly the best of the era, clearly better than every other team in the league this year, and well ahead of any other premier or runner-up. The Bulldogs are going to need to find ways to pick through Sydney’s defensive setup in a way Adelaide (+7 inside-50s) and Geelong (+32) were completely unable to. They have quite a different method of scoring than either of those sides, relying less on contested marks, and may provide a different test for the Swans.

The bright for the Bulldogs is their midfield edge. They should generate more opportunities to score and limit the more proficient Swans forwards. History shows having an edge in just one line is enough to give teams a chance.

As we can see above, the three teams with across the board advantages have all won (though, again, the 2002 grand final was surprisingly competitive), but that winning just one line has been enough for seven teams out of 15 in that situation.

Which single line is the most predictive? Unfortunately for the Bulldogs, and perhaps contradicting some prevailing wisdom, it is the superior offensive line which has the strongest edge while defence only wins 50% of the time:

Overall, our data presents an interesting picture. If the Bulldogs improvement in the midfield since the commencement of the finals continues (as well as the Swans’ dip there), then it should be a tight game on Saturday. However, if both teams revert to their form in the Home and Away season, then the Swans will have a decisive advantage. The Swans are the strongest team that the Bulldogs have faced so far this finals, and the Bulldogs the weakest opponent for the Swans (on the H&A HPN ratings).

This presents an interesting test: that of recent form against season long observed strength.

HPN usually refrains from picking outright results in games (as not to look like pontificating fools), but instead tries to pick the paths to victory where possible.

For the Bulldogs to win, they must dominate the territory battle between the arcs, deny the Swans chances to get the ball forward, and to wear down the Swans defenders with repeat entries.

For the Swans, they must aim to turn a likely superior ruck performance into an increased number of inside-50s (as compared to last week against the Cats). The Swans must exploit their apparent advantages up forward, and trust that their defence will hold up to repeated (but not constant) attacks down back.

It should be a fascinating game to watch, given the differing strengths of each team.